Recently CNN did a piece called "Slavery's Last Stronghold" on the prevalence of Slaves in Mauritania. (Read it Here)

The Introduction is as follows: "Mauritania’s endless sea of sand dunes hides an open secret: An estimated 10% to 20% of the population lives in slavery. But as one woman’s journey shows, the first step toward freedom is realizing you're enslaved." Written by John D. Sutter.

Mauritania borders the Western Sahara, which Morocco claims as its own, and which the United States recognizes as an independent territory being occupied by Morocco. Peace Corps was active in Mauritania until about August 2009 when the volunteers were evacuated. Volunteers are generally only evacuated when the volunteer's safety is at risk, usually due to politics. In this case, apparently the group Al Qaeda of the Islamic Maghreb was making its presence known in the region. Niger and Nigeria were also evacuated around the same time. (Morocco was evacuated in 2003 because of strong anti-American sentiment after we invaded Iraq) Technically, it has "suspended" the Peace Corps program in Mauritania, and not completely stopped it. This means that Peace Corps will, supposedly, return when conditions are safer.

One PC/Morocco volunteer I know, who has already completed his service, was part of the group of volunteers who was evacuated from Mauritania. After a little over a year in Mauritania, I suppose he decided he wasn't finished yet, and re-upped for another two years in Morocco.

I wanted more information on this slavery in Mauritania that I had never even heard about. So I asked this RPCV (returned PC volunteer) what his thoughts were on the article. His response was this:

The documentary certainly misrepresented a lot. Nothing they said was factually incorrect but they highlighted a few abuses, ignored a lot of context and made it seem a lot worse than it is. Many white moor families had a black moor family that "belonged to them." They would cook and do chores etc and while, I'm sure there were many cases of abuses, the system functioned because of lack of economic alternatives, not cruelty. No industries economically benefited from slavery. That was all mentioned but certainly not emphasized in the documentary probably because the reporters spent a total of 8 days in Mauritania. PC Mauritania was hard because it was a poor country without a lot of luxuries but in some ways it was easier than Morocco. People were welcoming and had fewer preconceived notions based on tourism. Harassment was lower and communities were closer. Mauritania has a host of serious problems, corrupt government, desertification, lack of water/enough wells, poor education system etc. Slavery will go away when those problems are fixed not when CNN airs a poorly made documentary.

So there you have another side to it. The photos of Mauritania were so beautiful and I imagine it is a lot what southern Morocco/Western Sahara territory looks like. I know the dress is the same because I have seen it even going as far West as Ourzazate. During our Peace Corps service we are absolutely forbidden to visit the Western Sahara Territory because it is supposedly dangerous, although I think it has more to do with that the U.S. doesn't recognize it as belonging to Morocco. I hope I get a chance to make it at least to Tan Tan, (basically the edge of Morocco, the edge of where we are allowed to go) before I leave and see this vast no-man's land. 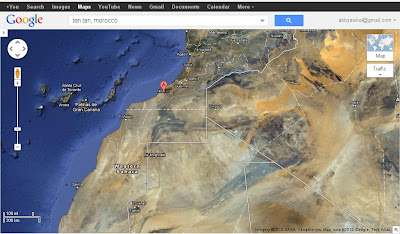 (the "A" marks Tan Tan and the dotted line marks the border between "Morocco" and Western Sahara. Where I'd REALLY like to go is Dakhla, which is the coastal city in the middle of Western Sahara. It's supposed to be beautiful and have some of the best surfing in the world, not that I surf.)

And now, for your viewing pleasure, is a video of my friend and colleague, Socorra, doing a duet with a Moroccan woman playing the Oud for a celebration of International Woman's Day. Never thought I'd see a Cross Cultural Duet of Pat Benatar's "Love is a battlefield"

Posted by Abby "La Marocaine" Seibel at 5:34 AM

Abby "La Marocaine" Seibel
Originally from Coconut Grove (Miami) FL. Joined the Peace Corps in September 2010. I thought it would be good to have a blog to document my adventures! I will be here until November 2012.